Karen Volkman’s award-winning collection Spar has as its central form a highly compressed, musical variant of the prose poem. Volkman develops a new lyric density that marries the immediacy of image-centered poetry to the rhythmic resources of prose. Her first poem begins, “Someone was searching for a Form of Fire,” and this wild urge to seek form—and thus definition—in the most uncontainable of elements propels the book forward; each poem maps the mind’s evolving positions in response to its variable and perilous encounters. Sometimes the encounter is romantic or purely carnal, a sensual landscape of human relations. At other times, nature itself has an almost humanly emotional connection to the speaker. While very much a living voice, the poems’ speaker is not a consistent self but a mutable figure buffeted by tenderness, terror, irony, or lust into elaborate evasions, exclamations, verbal hijinks, and lyric flights. As its title suggests, Spar embodies both resistance and aspiration, while its epigraphs further emphasize the simultaneous allure and danger of the unknown within the sensual and material worlds and in the mind itself.

“Karen Volkman is a young poet who presents her reader new knowledge. She convinces me, saying, ‘I believe there is a song that is stranger than wind.’ With utter confidence, her poetry teaches something more. From Karen Volkman I have learned there is another thing—profound and simple and beautiful—to say. In this book the reader will find grace, intelligence, and authority. Learn from her: 'Vacancy's ambassador, other—we are here.’”—Allen Grossman, author of How to Do Things with Tears

“Volkman convincingly melds her engagement with the ludic quality of words with the marvelously chatoic commerce of the natural world ...these poems are involved, elusive and often startling performance.”—Publishers Weekly, April 29, 2002

“Karen Volkman excels in a lyrical torque so polished, it borders on obsessive-compulsive ... Her poems are the best of contradictions, coupling tradition with today's sardonic uncertainty.”—Cathy Hong for Voice Literary Supplement Spring 2002

Praise for the author' first book

“Volkman’s style informs her work with an exciting confidence.”—Publishers Weekly

“Volkman’s poems sear us with their passion. (They) are quintessentially lyrical—blood-raw, soul-stinging, torqued by their forcefulness. A riveting, fresh, collection.”—Booklist

Winner of the 2001 Iowa Poetry Prize 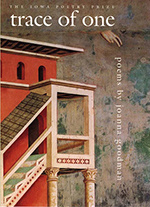