In My Father's Study

In 1921 Solomon Orlovski, a Russian Jew born in 1904, emigrated to America and transformed himself into Robert Orlove, a pattern maker in two senses of the term: during the day, he worked in the fur trade in New York and Chicago, making patterns for toys and hats; in his private life he became a self-taught artist who created prints, sketches, and collages in his study. More than sixty years later his son Ben—an anthropologist educated at Harvard and Berkeley—walked through the doorway of the deceased Robert's study and began to explore more than a half century of his father's experiences, thoughts, and emotions as well as his own very different life. His wry, sensitive combination of biography, memoir, and autobiography taps a remarkably rich vein of individual and collective experience in our diverse society.

Ben Orlove's dual narrative constitutes a family history of notable breadth and immediacy. By turns passionate and cool, dramatic and analytic, he excavates his father Robert's lifetime accumulation of diaries, letters, clippings, photographs, and artworks to create a convincing, deeply satisfying portrait that link both father and son.

“…extraordinarily moving in its recapturing of its time and spirit.”—Sander Gilman

“Combining an anthropologist's curiosity with a son's heartache, Ben Orlove offers us an engaging memoir of his father's dreams and losses as a Jew in America. A sensitive, unusual, and highly moving account.”—Ruth Behar

“…a beautifully realized experiment in bioautobiography. In many respects, it is a biography of one generation of Jewish men, that of Orlove's father, and an autobiography of another generation, that of Orlove himself. This is not only an important contribution to Jewish American history; it is an equally important contribution to the understanding of American culture in general. It delineates a whole new genre of writing: the bioautobiography.”—Hayden White 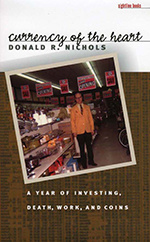 Currency of the Heart