A Place for Humility

Emily Dickinson and Walt Whitman are widely acknowledged as two of America’s foremost nature poets, primarily due to their explorations of natural phenomena as evocative symbols for cultural developments, individual experiences, and poetry itself. Yet for all their metaphorical suggestiveness, Dickinson’s and Whitman’s poems about the natural world neither preclude nor erase nature’s relevance as an actual living environment. In their respective poetic projects, the earth matters both figuratively, as a realm of the imagination, and also as the physical ground that is profoundly affected by human action. This double perspective, and the ways in which it intersects with their formal innovations, points beyond their traditional status as curiously disparate icons of American nature poetry. That both of them not only approach nature as an important subject in its own right, but also address human-nature relationships in ethical terms, invests their work with important environmental overtones.

Dickinson and Whitman developed their environmentally suggestive poetics at roughly the same historical moment, at a time when a major shift was occurring in American culture’s view and understanding of the natural world. Just as they were achieving poetic maturity, the dominant view of wilderness was beginning to shift from obstacle or exploitable resource to an endangered treasure in need of conservation and preservation.

A Place for Humility examines Dickinson’s and Whitman’s poetry in conjunction with this important change in American environmental perception, exploring the links between their poetic projects within the context of developing nineteenth-century environmental thought. Christine Gerhardt argues that each author's poetry participates in this shift in different but related ways, and that their involvement with their culture’s growing environmental sensibilities constitutes an important connection between their disparate poetic projects. There may be few direct links between Dickinson’s “letter to the World” and Whitman’s “language experiment,” but via a web of environmentally-oriented discourses, their poetry engages in a cultural conversation about the natural world and the possibilities and limitations of writing about it—a conversation in which their thematic and formal choices meet on a surprising number of levels.

“Gerhardt’s study is at once an exemplary contribution to the field of ecocriticism and a truly groundbreaking comparison of two of America’s greatest poets. Summing up: Essential.”—CHOICE

“The arguments of A Place for Humility clearly create a place for [Gerhardt’s] work among the very best Whitman scholarship and writing. [The book] makes all of [its] arguments in a clear, jargon-free prose style that is often a real pleasure to read. [...] As a close-reader, Gerhardt is balanced, generous, and sharply intelligent. She picks up details and turns them to account in sometimes surprising ways. [...] By bringing Whitman into the light shed by Dickinson, [she] illuminates new ways of reading the two poets together, rather than simply in opposition to on another. [...] Always respectful of previous scholarship and criticism, Gerhardt brings an important new perspective to the two greatest poets of nineteenth-century America.  Her view opens new possibilities of reading, renewing the vision of both the poets and their readers.”—Walt Whitman Quarterly Review

“Winner of the 2015 Choice outstanding academic title, Christine Gerhardt’s A Place for Humility: Whitman, Dickinson, and the Natural World (2014) is an indispensable ecocritical study of the poetry of Emily Dickinson and Walt Whitman that brings welcome and sophisticated attention to these writers’ complex representations of the natural world […]. It deserves the attention of both specialists in US poetry and environmental criticism, along with generalists looking for contemporary successors to landmark works like Roderick Nash’s Wilderness and the American Mind (1967), Leo Marx’s The Machine and the Garden  (1964), and Angus Fletcher’s more recent A New Theory for American Poetry (2006).”—American Literary History

“Christine Gerhardt's A Place for Humility supersedes all other books (including my own) as the best study of both Whitman’s and Dickinson’s nature poetry. No ecocritic, not even leaders in the field, brings a stronger comprehension of nineteenth-century proto-ecological discourse to such an extensive reading of the best poetry of the day, and no other scholar draws a stronger connection between two poets often considered polar opposites—Whitman and Dickinson—their mutual ecopoetics (and surprisingly even their gender politics) proving here a sturdy bridge that will bear enduring use for some time to come. The emergence of ecology as a science and worldview in the nineteenth century provides the common ground for realizing the deep relationship of Whitman and Dickinson not only as poets but also as thinkers and ethicists.”—M. Jimmie Killingsworth, author, Walt Whitman and the Earth: A Study in Ecopoetics

“Readers wishing to broaden the ecocritical canon will welcome this searching, deeply informed and eloquent environmental reappraisal of Whitman and Dickinson, which puts environmental humility at the heart of their poetics and points the way to reading a far broader range of literature through contemporary debates in environmental science and politics.”—Laura Dassow Walls, University of Notre Dame 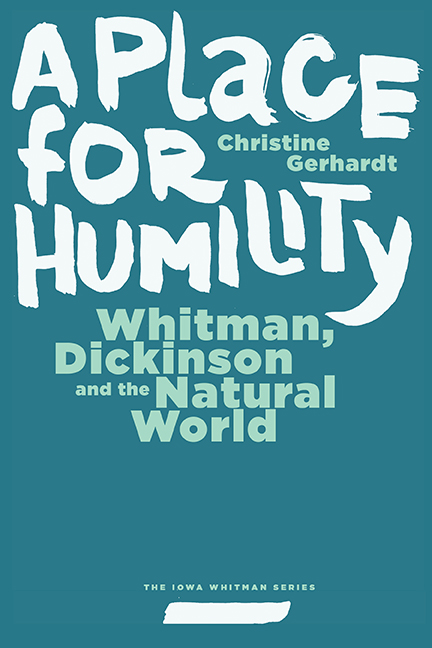 Walt Whitman and the Earth