In the arena of poetry and poetics over the past century, no idea has been more alive and contentious than the idea of form, and no aspect of form has more emphatically sponsored this marked formal concern than the line. But what, exactly, is the line? Emily Rosko and Anton Vander Zee’s anthology gives seventy original answers that lead us deeper into the world of poetry, but also far out into the world at large: its people, its politics, its ecology. The authors included here, emerging and established alike, write from a range of perspectives, in terms of both aesthetics and identity. Together, they offer a dynamic hybrid collection that captures a broad spectrum of poetic practice in the twenty-first century.

Rosko and Vander Zee’s introduction offers a generous overview of conversations about the line from the Romantics forward. We come to see how the line might be an engine for ideals of progress—political, ethical, or otherwise. For some poets, the line touches upon the most fundamental questions of knowledge and existence. More than ever, the line is the radical against which even alternate and emerging poetic forms that foreground the visual or the auditory, the page or the screen, can be distinguished and understood.

From the start, a singular lesson emerges: lines do not form meaning solely in their brevity or their length, in their becoming or their brokenness; lines live in and through the descriptions we give them. Indeed, the history of American poetry in the twentieth century could be told by the compounding, and often confounding, discussions of its lines. A Broken Thing both reflects upon and extends this history, charting a rich diffusion of theory and practice into the twenty-first century with the most diverse, wide-ranging and engaging set of essays to date on the line in poetry, revealing how poems work and why poetry continues to matter.

“Whether oral or written, ancient or modern, from one hemisphere or another, most poetry has organized itself in basic units that English calls lines. In their energetic collection of brief essay-sprints, Emily Rosko and Anton Vander Zee offer us nearly seventy contemporary writers’ thoughts about poetic lines. The result is a rich and glorious variety of insights and formulations, lavishly inclusive and resolutely uncommitted to any single orthodoxy. The editors’ forthright introduction is illuminating, judicious, and open-handed. This is a book that anyone drawn to the study of poetic form and its largest meanings should know.”—Stephen Cushman, author, Riffraff, and editor, Princeton Encyclopedia of Poetry and Poetics

“A Broken Thing is a lovely, useful, and well-conceived book. From the introduction’s astute and informative discussions of the historical embeddedness of tussles over the poetic line in poetry to the essays thereafter, readers and writers will be made aware that there is, as Rosko and Vander Zee note, no consensus, an awareness that can be vital for a young poet. A Broken Thing gathers the arguments and exchanges of the day. It does not offer essays that correct or offer definitive approaches to the line; on the contrary, it gathers the hubbub of voices that any critical approach would need to take into account.”—Lisa Steinman, author, Made in America, Masters of Repetition,and Invitation to Poetry and coeditor, Hubbub

“Negotiating segmentivities (a.k.a. line and sentence) defines poetry as a mode of practice. This energetic anthology examines the line from many poetic formations, assumptions, incarnations, platforms, and positions; it faces multiple debates with panache and frankness. The range and élan of the contributors present a strikingly pragmatic sense of contemporary poetics.”—Rachel Blau DuPlessis, author, Blue Studios and Drafts 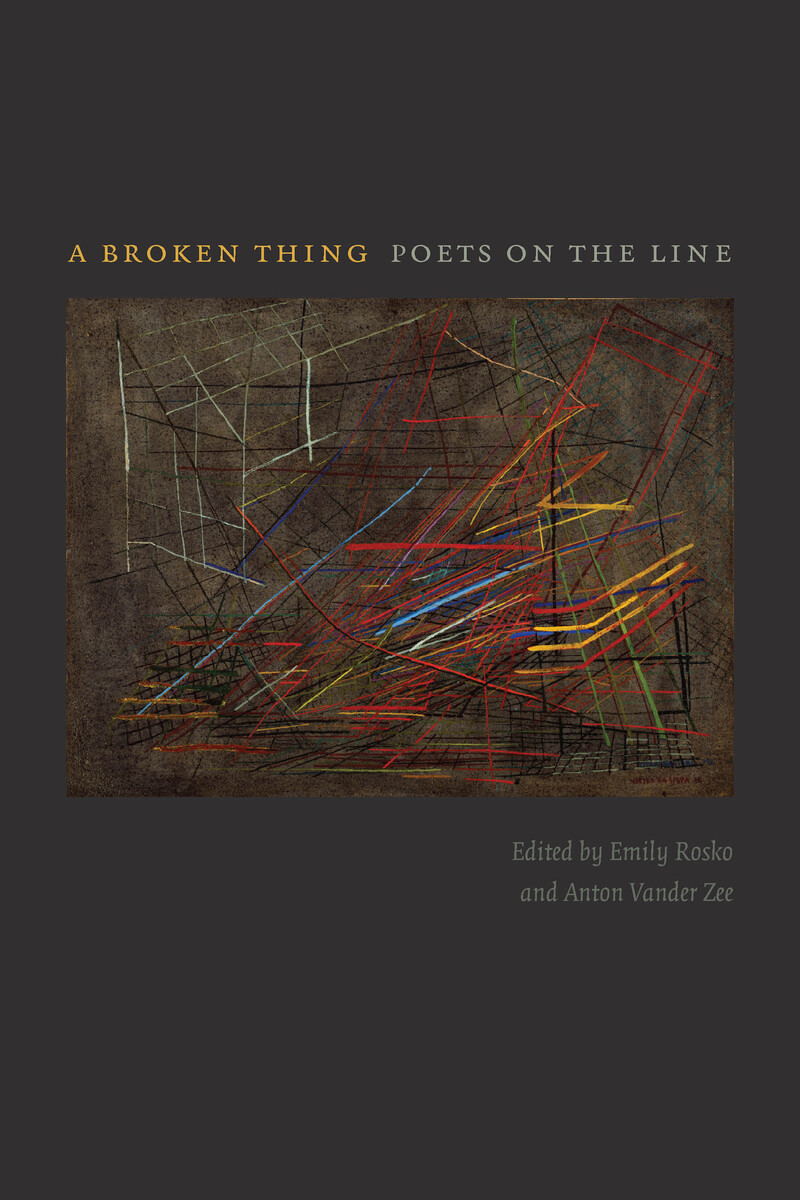