The Indians of Iowa

Many different Indian tribes have lived in Iowa, each existing as an independent nation with its own history, culture, language, and traditions. Some were residents before recorded time; some lived in Iowa for relatively short periods but played memorable roles in the state’s history; others visited Iowa mostly during hunting trips or times of war. Stimulating and informative, Lance Foster’s The Indians of Iowa is the only book for the general reader that covers the archaeology, history, and culture of all the different native nations that have called Iowa home from prehistory to the present.

Foster begins with a history of Lewis and Clark’s travels along the Missouri River adjacent to western Iowa. Next, he focuses on the tribes most connected to Iowa from prehistoric times to the present day: the Ioway, Meskwaki, Sauk, Omaha and Ponca, Otoe and Missouria, Pawnee and Arikara, Potawatomi, Illinois Confederacy, Santee and Yankton Sioux, and Winnebago. In between each tribal account, “closer look” essays provide details on Indian women in Iowa, traditional ways of life, Indian history and spirituality, languages and place-names, archaeology, arts and crafts, and houses and landscapes. Finally, Foster brings readers into the present with chapters called “Going to a Powwow,” “Do You Have Indian Blood?” and “Indians in Iowa Today.” The book ends with information about visiting Native American museums, historic sites, and communities in Iowa as well as tribal contacts and a selection of published and online resources.

The story of the Indians of Iowa is long and complicated. Illustrated with maps and stunning original art, Lance Foster’s absorbing, accessible overview of Iowa’s Indian tribes celebrates the rich native legacy of the Hawkeye State. It is essential reading for students, teachers, and everyone who calls Iowa home.

“For the past several decades I have received many questions from people seeking information on the tribes who lived in Iowa. Until now there has been no single source to answer those questions. Lance Foster’s work will be the source of first reference. It should be on the shelf of every library in the state.”—Jerome Thompson, state curator and interim administrator, State Historical Society of Iowa 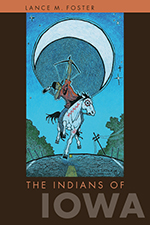 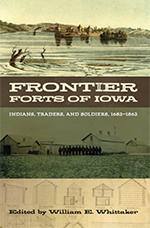