A Dictionary of Iowa Place-Names

“Primghar, O’Brien County. Primghar was established by W. C. Green and James Roberts on November 8, 1872. The name of the town comes from the initials of the eight men who were instrumental in developing it. A short poem memorializes the men and their names:

Pumphrey, the treasurer, drives the first nail;
Roberts, the donor, is quick on his trail;
Inman dips slyly his first letter in;
McCormack adds M, which makes the full Prim;
Green, thinking of groceries, gives them the G;
Hayes drops them an H, without asking a fee;
Albright, the joker, with his jokes all at par;
Rerick brings up the rear and crowns all ‘Primghar.’
Primghar was incorporated on February 15, 1888.”

Lourdes and Churchtown, Woden and Clio, Emerson and Sigourney, Tripoli and Waterloo, Prairie City and Prairieburg, Tama and Swedesburg, What Cheer and Coin. Iowa’s place-names reflect the religions, myths, cultures, families, heroes, whimsies, and misspellings of the Hawkeye State’s inhabitants. Tom Savage spent four years corresponding with librarians, city and county officials, and local historians, reading newspaper archives, and exploring local websites in an effort to find out why these communities received their particular names, when they were established, and when they were incorporated.

Savage includes information on the place-names of all 1,188 incorporated and unincorporated communities in Iowa that meet at least two of the following qualifications: twenty-five or more residents; a retail business; an annual celebration or festival; a school; church, or cemetery; a building on the National Register of Historic Places; a zip-coded post office; or an association with a public recreation site. If a town’s name has changed over the years, he provides information about each name; if a name’s provenance is unclear, he provides possible explanations. He also includes information about the state’s name and about each of its ninety-nine counties as well as a list of ghost towns. The entries range from the counties of Adair to Wright and from the towns of Abingdon to Zwingle; from Iowa’s oldest town, Dubuque, starting as a mining camp in the 1780s and incorporated in 1841, to its newest, Maharishi Vedic City, incorporated in 2001.

The imaginations and experiences of its citizens played a role in the naming of Iowa’s communities, as did the hopes of the huge influx of immigrants who settled the state in the 1800s. Tom Savage’s dictionary of place-names provides an appealing genealogical and historical background to today’s map of Iowa.

"This book belongs in every Iowa history collection."—The Annals of Iowa

“It is one of the beauties of Iowa that travel across the state brings a person into contact with so many wonderful names, some of which a traveler may understand immediately, but others may require a bit of investigation. Like the poet Stephen Vincent Benét, we have fallen in love with American names. They are part of our soul, be they family names, town names, or artifact names. We identify with them and are identified with them, and we cannot live without them. This book will help us learn more about them and integrate them into our beings.”—from the foreword by Loren N. Horton 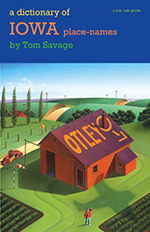 The Biographical Dictionary of Iowa 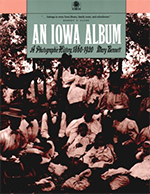